In the sixties they asked, “Where have all the flowers gone?”  Today I wonder: Where have all the spread loans gone?  Running historical trend charts in LendingPatterns™ reveal that spread lending still exists.  The next logical question is: Which investors are meeting the secondary market needs for these loans?  Or more importantly, who is absorbing the risk?  The trend chart by investor outlet indicates non-agency options and portfolio lending lead investor outlets, followed by Ginnie Mae securitization.  Putting this in perspective, at the peak of sub-prime lending, Non-Agency investors dominated the field.

Drilling down into the Non-Agency investors category, we see from the pie chart below that Insurance companies were the preferred outlet in 2017 for risk-based priced loans. The numbers also reveal that private-label securities (PLS) have flatlined, one of the preferred outlets for spread loans before the housing bust. 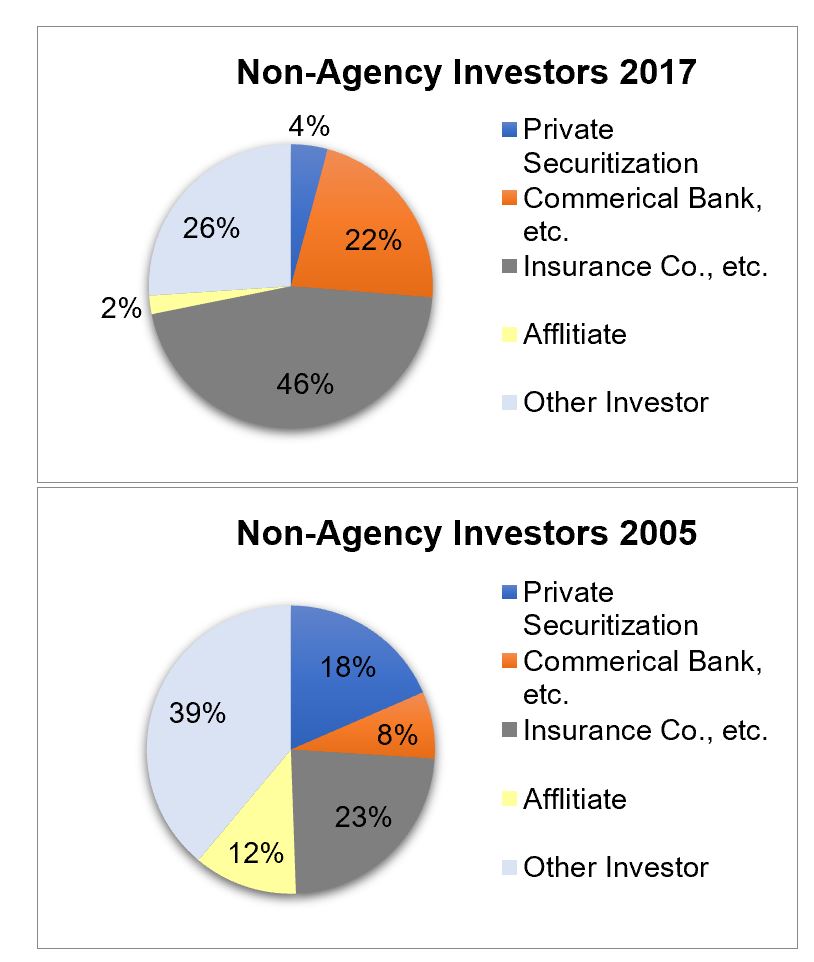 Before I weigh-in about the viability of the PLS market, I want to turn my focus to the underlying collateral (originated and purchased loans).  Back in 2005, the majority of loans were conventional, conforming, owner occupied, 50/50 split between purchase and refinance for properties located in middle income census tracts.  Today the product type is more diversified with guvvy loans in the mix.  The other application characteristics mirror 2005.  The key difference is the spread percent: in 2017, about 18% of all PLS include spread with an average spread amount of 3.1, compared to a whopping 54% with average spread of 5.0 in 2005. 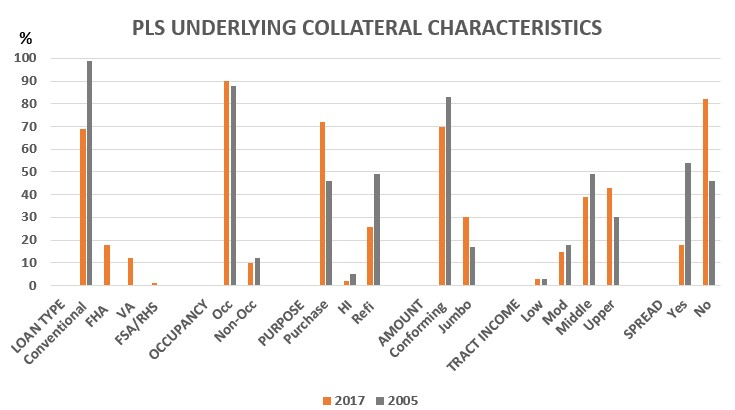 Last question: Who were the players back in the day?  Unless you were still in “elhi” in 2005, you know the answer to this question; Countrywide topped the list.  Most of the key private label MBS players in 2005 are defunct today.  The list of new players is dominated by independent mortgage companies, with a couple of CFPB regulated institutions in the field.

The asset class with consumer protections (Qualified Mortgage rule) point to a stronger PLS market in the future.  Although it is doubtful that the levels in the peak years will ever be reached again.  However, as long as bond fund managers are willing to invest in non-Agency MBS and are rewarded with higher yields, this new generation of PLS will be an investor outlet for mortgage originators, especially as a way for mortgage companies to compete with portfolio lenders.